President Juan Manuel Santos, Bogota Mayor Gustavo Petro, the Peace Commissions of the Colombian Congress, the Marcha Patriótica, and a broad range of social organizations called for a national march to support the peace process on April 9th.   The date was highly symbolic, having been established last year as a national day of memory and solidarity with the victims of Colombia’s internal armed conflict by the Law for Victims and Land Restitution.  April 9th is also the anniversary of the killing of Jorge Luis Eliécer Gaitán, the popular presidential candidate of the Liberal Party, whose death in 1948 set off partisan fighting that resulted in hundreds of thousands of deaths and launched the period known as La Violencia, a precursor to the current internal armed conflict. 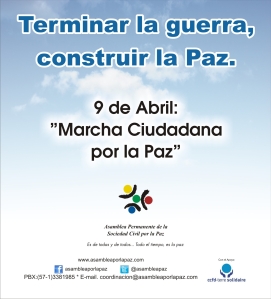 Colombians went to the streets Tuesday to show their support for peace.

In his address on the eve of the march, President Santos affirmed that the “stars are aligned” for peace and noted, “The best tribute we can give to the millions of victims of violence is to ensure that in the future there are no more victims, there is no more conflict, there is no more bloodshed or tears:  that we conquer peace.”

What began as a day to commemorate victims exploded into a widespread call for peace and a series of marches and ceremonies.  In Bogota, the mayor declared a “civic day” and granted public employees a holiday to enable their participation in the day’s events.  Marchers dressed in white, held white balloons, and wore shirts that affirmed, “My contribution is to believe, I believe in peace.” (Mi aporte es creer, yo creo en la paz).  Banners called for a negotiated solution, a bilateral ceasefire, and peace with social justice.  Victims’ groups called for a place at the peace table.

At an early morning event at Bogota’s Monument to Heroes Fallen in Action, President Santos paid homage to the millions of victims of Colombia’s 65-year old conflict, including “soldiers and police who fell defending the nation, democracy and security.”  He told uniformed military and police to ignore rumors that they would be sacrificed at the peace table, and underscored their role in making peace possible.  (At the event, Santos reiterated his opposition to a bilateral ceasefire, which has been demanded by many civil society organizations, noting that it would be tantamount to declaring the entire national territory a demilitarized zone.  See my earlier post on ceasefires.) 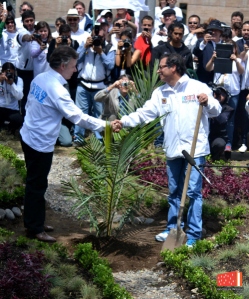 Following the ceremony, the crowds proceeded to Bogota’s newly opened Center for Memory, Peace and Reconciliation, where President Santos and Bogota Mayor Gustavo Petro, a former M-19 guerrilla, jointly planted a wax palm tree, Colombia’s national tree, as a symbol of peace.  Petro’s speech on reconciliation reinforced this image of unity and sent a message that Colombian politics can accommodate ex-combatants within its electoral  structures.  This is a timely and appropriate message for the negotiators in Cuba as they prepare to wrap up work on the issue of agrarian development policy and begin discussions about political participation.

Representatives of a vast ideological spectrum and a wide range of sectors–totaling some 900,000-1 million people, according to the Bogota police–participated in the day’s activities.  (Check out these pics of Bogota.) Outside the capital, other cities –Barranquilla, Cali, Medellín, Cartagena, Santa Marta–held their own marches for peace.

Significance of the Rallies for Peace

While noting the complex intersection of electoral politics with the march (which some observers considered the launching of Santos’s re-election campaign), political commentators noted that the rallies were successful in giving President Santos a clear mandate for pursuing a peace agreement. (See “Semana en Vivo.”)

Members of the Colombian government negotiating team, some of whom were present at the rallies, and the FARC negotiating team, recently reinforced with new members in Havana, expressed satisfaction with the public show of support for the peace talks.  Sergio Jaramillo, the High Commissioner for Peace, like the President himself, acknowledged that progress continues at the peace table, and that broadening the FARC negotiating team with new negotiators, including Secretariat member Pablo Catatumbo, will help ensure that whatever agreement is reached has the backing of a broader array of guerrilla forces.

Tuesday’s march suggests that the public is watching what is happening in Havana, and that a substantial portion of Colombian society across the board favors an end to the armed conflict.  An informed, engaged public will have an important role to play in ensuring that the parties remain at the table until an agreement is reached, and in pressuring for the negotiators to reach agreements.  A pluralistic, peace-loving public is also a potential counterbalance to the small but powerful sector lead by former President Alvaro Uribe that has opposed the dialogues in Havana.  Finally, without sufficient engagement of civil society, it will be difficult to legitimize any agreements reached by the table.  Much remains to be done to ensure a solid constituency for future accords, but this week’s activities were a good start.

DEAR BLOG READERS:  WHAT DID YOU THINK OF THE APRIL 9th MARCH?

6 Responses to Rallying for Peace