The Role of the Churches in the Struggle for Peace

In an earlier blog, I discussed President Santos’s visit to Rome last month and some recent peace-related initiatives of the Catholic church in Colombia.  This post will look more broadly at the roles of the churches with regard to peace in Colombia, and discuss three emerging trends:  the spirit of ecumenism and its focus on ethics, the articulation of an identity of ecumenical women peace builders within that trend, and the growing international partnerships for peace within and across churches.

Religious leaders and people of faith have been consistently present within Colombia’s broader movement for peace and justice.  In addition to church statements that bear witness to and provide guidance on ethical postures in relation to peace and conflict, such as the Colombian Bishops’ Conference statement, “Peace is the Fruit of Justice,” priests, pastors, women and men religious, and a variety of Colombians working on behalf of church institutions or from a conviction of faith have sought ways to prevent and mitigate violence in their communities, to engage in pastoral dialogues with armed actors, to document human rights abuses, and to advocate for humanitarian relief and a political solution to the conflict.

Many church workers of largely Christian faiths are accompanying poor, rural, and displaced communities at the grassroots level.  They are often caught in the crossfire and have suffered the same ravages of war as the broader civil society.  Church leaders have been assassinated and threatened by all of the armed actors, congregations and parishes have been displaced, and churches have been closed because of conflict violence.  In this video created by the Mennonite Church,  Ricardo Esquivia, Jenny Neme, and other religious peace leaders who have inspired and informed my work, talk about the role of the churches in the search for peace and justice in Colombia:

The churches have set up numerous mechanisms for peace and development work.  Some of these–like the Colombian Conciliation Commission and the National Pastoral Social Ministry of the Colombian Catholic Bishops Conference, and the Commission of Restoration, Life, and Peace of the Council of Evangelical and Protestant Churches of Colombia (CEDECOL) on the Evangelical Protestant side–are part of the infrastructures of the church.  Likewise, organizations like the Jesuit-based Center for Research and Popular Education (CINEP), the Mennonite-supported Justapaz and Mencoldes, and the Comisión Intereclesial de Justicia y Paz are dedicated arms of the church to carry out particular mandates of the churches with regard to peace and development.

At the local level too, the churches are providing legal, psychological, physical, and spiritual accompaniment to victims, especially to the displaced and the most vulnerable.  They have have sought ways to help communities honor and dignify victims, support conscientious objectors, provide sanctuary, engage in prayer and action for peace, and promote truth, justice, reparations, and reconciliation.  They are working with survivors, communities, and ex-combatants to promote healing.  Many ground their work in the Biblical concept of peace as the fruit of justice (Is. 32:17), the dignity of the person, and a belief in universal human rights.  Likewise, religious traditions of confession and forgiveness are important tools for survivors in the aftermath of violent conflict.

The spirit of ecumenism in Colombia has been slow to take hold, but an ecumenical movement for peace is incipient and appears to be growing.  On May 18-19, a national Ecumenical Forum for Peace at the Javeriana University in Bogotá was convened by the Mesa Ecuménica para la Paz, an alliance born in April 2012 with the backing of the leaders of many different Christian churches.

The Forum brought together some 300 participants from different parts of the country and resulted in a reflective statement on peace and ethics, “From an Ethic for Peace to a Peace with Ethics”  (“De una ética para la paz a una paz con ética“).  Participants addressed the need for an ethics of life, solidarity, transparency, truth, and democracy.  The forum launched a week of prayer for the unity of all Christians for peace.

Ecumenism in the Colombian context generally seeks to bridge Catholic and Protestant faiths.  It has been slow to take hold, given the deep historic divide and tensions between Catholic and Evangelical Protestants in Colombia.  Until the 1991 Constitution instituted the protection of religious freedom, Catholicism was the privileged state religion in Colombia and Protestants suffered religious persecution and discrimination.

The Colombian population today falls into two major religious groups–the Catholic Church, with some 80-90 percent of the population, and other non-Catholic Christians of various denominations including Mennonites, Lutherans, United Church of Christ,  Presbyterians, and others.  There are a small number of non-Christian groups, including some 70,000 members of the B’hai Faith and perhaps 7,000 members of the Jewish faith (largely converted descendants of Sephardic Jews expelled from Spain 500 years ago) (see ‘Lost Jews’ of Colombia).  Faith traditions and spirituality are strong within indigenous and Afro-Colombian communities.  I have seen no signs (yet) of a broader coalition of faith-based groups for peace that goes beyond the Christian world, though perhaps it exists beneath the radar. 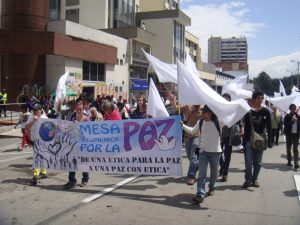 Within and growing out of the ecumenical movement for peace, teams of Catholic and Evangelical Protestant women have coalesced slowly in eight regions of Colombia, and are working  intentionally through their rocky history of tensions.  (Click here to read my earlier post and see photos.)  I have been privileged to accompany this process and to watch and support this network of ecumenical women peacemakers, who are  becoming an identifiable force within Colombia’s broader peace movement.

Transnational Prayer and Action for Peace

The movement for peace extends beyond Colombia’s borders, and transnational partnerships have also become part of this peace movement.  Christian Peacemaker Teams, Jesuit Refugee Services, Witness for Peace, Pax Christi International, Lutheran World Relief, and Caritas International are just a few of the faith-based organizations that act on  principles of transnational accompaniment and solidarity.   Global partnerships between particular churches or denominations have fostered deep personal ties (and vice versa).  These bonds are strengthened by regular communication and visits to exchange ideas, and develop strategies and common platforms for action. (See the recent television program, Café con Fe, starring a visiting U.S. church delegation to Colombia, on my last blog post.)

Days of Action and Prayer 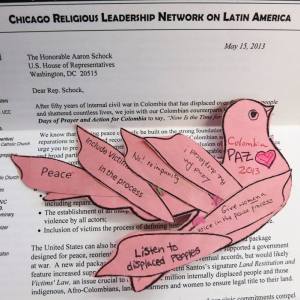 For more than six years now, Protestant and Catholic churches in Colombia and the United States have engaged in what have become known as Days of Prayer and Action.  This year’s actions included initiatives designed to raise awareness of the peace agenda in Colombia as well as advocacy with national leaders of both countries.  In a letter to President Santos, the negotiating table, and the Peace Commissions of the Colombian Congress, Colombian church leaders and faith communities called on the government of Colombia and the FARC to “stay at the negotiating table until you reach an agreement that would reduce the violence, the humanitarian crisis that the armed conflict is generating, and allow all citizens to participate in the construction of peace.”  They wrote, “For our part, we will continue to pray and as part of civil society we will continue to support initiatives where peace is the fruit of justice…” (“Por nuestra parte seguiremos en oración y como parte de la sociedad civil continuaremos aportando a las iniciativas donde la paz sea fruto de la justicia, desde nuestras iglesias y en las comunidades donde damos testimonio del evangelio de paz a nivel local, regional y nacional.”)

In the United States, over one hundred leaders of Catholic and Protestant communities and faith-based organizations sent a similar letter to U.S. President Barak Obama and  Secretary of State John Kerry.  They called on the U.S. leaders to support Colombia’s peace process and to recognize the crucial role of faith communities in aiding Colombia’s victims.  (Read the letter in its entirety here.)  On April 29, Colombian religious leaders held a peace vigil in Bogota, where they delivered the letters from the U.S. and Colombian religious leaders to the Peace Commissions of the Colombian House and Senate to be delivered to the negotiators in Havana.

For more on the Colombian churches’ role in peace in Colombia, see the excellent chapters by Héctor Fabio Henao Gaviria, “The Colombian Church and Peacebuilding,” and Ricardo Esquivia with Barbara Gerlach, “The Local Community as a Creative Space for Transformation: The View from Montes de María,” in Virginia M. Bouvier (ed.), Colombia: Building Peace in a Time of War (Washington, D.C.: United States Institute of Peace Press, 2009).