The city is abuzz with talk about the new accord on political participation reached by Colombian government and FARC-EP negotiators in Havana at the close of the sixteenth round of talks on Wednesday, November 6th.  (For the Spanish-language version of the communique, click here.  An English version isn’t available yet, but an overview can be found in my post in “The Olive Branch” and in Juan Forero’s piece in the Washington Post.)

“Participation,” by Yurika, Exhibit on Human Rights of the Ayara Foundation, Bogotá

The mood here in Bogota is as close to euphoric as I have seen.  All of the political parties except that of ex-President Uribe have backed the accord enthusiastically.  The talks “can’t be interrupted or stopped when results are seen,” announced President Santos. (“No se puede romper o parar cuando se ven resultados.”)  The general sense is that this agreement, like that on rural agrarian reforms reached last May, goes far beyond what was anticipated in addressing the roots of Colombia’s fifty-year old internal armed conflict.  It will promote significant political electoral reforms that encourage greater citizen participation, protect the rights to protest and dissent, and encourage transparency.  Government negotiator Humberto de la Calle has said that the accord will “transform the history of exclusion” that has characterized Colombian politics.  The agreements will not be implemented unless and until a full comprehensive agreement is reached. 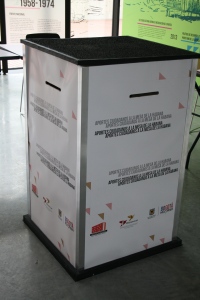 Participation and access to media are key to deepening democracy.  We discussed the need to strengthen the relationship of institutions to the citizenry, the role of the Colombian Congress, and the mechanisms that the Peace Commission had initiated last year with the technical support of the United Nations.  In some eight regions of Colombia, two-day consultations were organized to generate inputs from civil society for the table in Havana.  This exercise has now been done twice, and covered four of the agenda items–agrarian reform, political participation, and illicit crops in the first round of consultations; and the issue of victims in the second round.   I was able to observe the workshops in Medellín in October 2012 and provide some technical support. These forums generated succinct proposals from civil society and were welcomed by the negotiators, but the mechanism did not provide an opportunity to discuss the proposals or to identify consensus issues or establish priorities.  Nonetheless, the consultations provide a strong base and structure for a wider national dialogue that could be nurtured once the peace accords are signed.

Last month, the Peace Commissions hosted a hearing on the anniversary of the formal launch of the peace talks in Norway–the first such hearing on the peace process.  The concern at the time was that the negotiators might suspend the peace talks for the electoral period.  Wednesday’s announcement of the political participation agreement appears to have put these concerns to rest.  The Commissions are preparing another hearing for November 18 in recognition of the one-year mark since the talks began in Havana.

I shared with the Peace Commissioners the statement (available here) that the office of U.S. Congressman Jim McGovern, co-chair of the Lantos Human Rights Commission (LHRC), had released just before my meeting.  I also told them about the hearings that the LHRC held in the U. S. Congress two weeks ago on human rights in Colombia (transcript now posted here).  Rep. Martínez noted that statements by the United States in support of the peace talks provide a healthy pressure, particularly in moments of crisis, and could help sustain the talks until a final agreement is reached.

Finally, we discussed some of the significant challenges ahead, particularly as the electoral campaigns get under way.  The issues of war and peace will be decisive.  In this electoral period, Uribe and his backers have come out strongly against the peace talks.  They have been adept at using the media and Uribe’s Twitter account to promote their message through inflammatory rhetoric, the promotion stereotypes that generate fear, and a call for greater militarization.  Countering these messages with calls for peace and reconciliation will be a challenge.

Minister of Defense Juan Carlos Pinzón, who has not been a supporter of the talks, still suggests that military victory is possible, and even preferable.  I heard him say on this morning’s news (Cable Noticias) that the accord on political participation represents “a victory of the Military Forces and the Police,” and the “military defeat” of the FARC.  This kind of language is a sign that success is at hand and everyone wants to take credit for it.

Other challenges ahead are daunting, and the work does not all fall to the negotiators.  Preparing for a signed accord requires thinking ahead as to how the population can engage itself in a process of peace-building.  Most directly, they will be called on to ratify the terms of any agreement that is reached. (The particular mechanism will be defined in Havana, though the government is taking measures to ensure that a referendum mechanism during the upcoming elections will not face legal problems.)  Likewise, mechanisms are needed for citizens to prepare themselves to help implement the accord and to create a climate propitious for sustaining the peace.  This will likely include processes of truth-telling and reconciliation (national and territory-based mechanisms are laid out in the latest accord).  Likewise, local authorities will need to anticipate shifts in populations and the arrival and integration of ex-combatants into their communities.  Mechanisms for training local authorities to implement new regulations will be needed.  There is much preparatory work that needs to be done while the negotiators address the final items on their agenda.

7 Responses to Long-Awaited Accord Surpasses Expectations